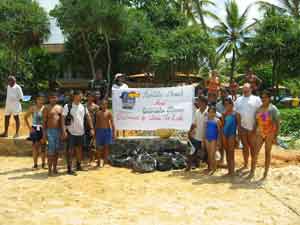 On February 14th 2004 (Valentines Day) about twelve Sri Lankan SCUBA enthusiasts (from divelanka@yahoogroups.com) gathered on the shores of Bentota at the first break of dawn. Their objective was to search and recover scores of abandoned fishnets from the ocean bottom around an area known to the locals as Hundirangala.

Over the years many ecologically harmful fishing practices have contributed to damage of coral reefs. One such technique is "drop & dragging" fishing nets. Fish nets which are dropped and dragged around coral reef areas result in entanglement and destruction of the top coral layer. Evidence of such entanglement can be seen in abundance around Hundirangala in the form of coral grave yards and remains of fishnets. Such remains cause further damage due to suffocation of coral polyps and thus hinder the ability of the reef to recover from damage caused by dragging fishnets.

Under the auspices of veteran Master Scuba Diver Trainer Mr. Eric Fernando of Scuba Sri Lanka (who originally came up with this idea), the SCUBA divers organized themselves into two groups of about 6 individuals and homed in on two different locations around Hundirangala. Unfortunately the visibility was absolutely horrendous at less than ½ a meters! Yet the divers prevailed and conducted about 3 dives at 10 meters and hauled in considerable amount of fishnets. The visibility was so low that buddy separation occurred in almost all dives.

Because of the deteriorating visibility and approaching decompression limits the dives were aborted and the divers safely returned back to the shore. Had the visibility been much better the clean up would have been much more effective.At the same time Junior Underwater SCUBA divers had conducted a clean up of the Bentota beach front. The litter left behind by beach goers were collected and disposed.This event was organized by SCUBA enthusiasts(divelanka@yahoogroups.com) and sponsored by Scuba Sri Lanka (SSL). The equipment and dives were provided by Scuba Sri Lanka Bentota free of charge.

Participants (from divelanka@yahoogroups.com)
Alefiya Akbarally
Dinesh Amarasekara
Rapti Eusafally
Tamara Jayaratnam
Jayesh Nanayakkara
Vish Kumaraswamy
Kamal Doranegama
Mansoor Akbarally
Murtaza Lukmanjee
Ratten Abdulhussein
Mohammed Abidally (Is the moderator of divelanka@yahoogroups. Mohammed also started this forum which has proven to be a very popular source of information/experience sharing amongst Sri Lankan Scubaholics!. Mohammed also coordinated the beach cleanup at this event. Please feel free to mail this group and add your self to the list if you wish.)

(See the press release for Adoh! magazine by Alefiya Akbarally who participated in the clean up)

The clean up continues!

Since the clean up at Hundirangala was hindered during the first clean up and not entirely successful, Tamara Jayaratnam proposed that when ever the members in the group dive in Bentota, they make the second dive at Hundirangala and haul in a fish net. Thus each such dive will contribute to reducing the amount of fish nets in the area. Based on this plan Rapti Eusafally, Tamara Jayaratnam and Dharshana Jayawardena returned to this area on March 13th with Dive Master Udyanga from SSL and hauled in a very large and long fishnet. Tamara and Uydanga followed the net to the North West as much as possible before severing the net at a certain point while Rapti and Dharshana headed South East along the net and managed to find the end extent before reeling it back in. The visibility was about 2M and net extraction disturbed silt reducing the visibility to almost zero. The net was secured in a bin prior to retrieval. The haul was so heavy that it required all four divers to do a buoyant ascent.

Check out other activities.